Why I’m Not an Environmentalist

I believe in climate change. I ride my bike everywhere, I work at a solar company, I buy organic and local when I can. I am young, liberal and idealistic. But I’m not an environmentalist. And I’m not alone.

Over the past decade the number of Americans who identify as environmentalists has steadily declined, from a peak in 1990 of 75 percent to less than half of Americans today. For most of the past three decades, a strong majority of Americans prioritized the environment, even at the risk of curbing economic growth. But since 2009, most of us have been unwilling to make that trade-off.

At the same time, as the New York Times recently reported, a large majority of Americans believe that the weird weather of late is at least partially caused by global warming. Another poll showed that 83% of Americans want more government support for clean energy. Yet another showed that three in four Americans recycle, have reduced their household energy use and buy environmentally friendly products.

In sum: Americans are beginning to believe in climate change and most of us have adopted various forms of environmentally-friendly behaviors. But, we now prioritize economic growth over the environment and don’t want to be called “environmentalists.” So what’s changed? Is it just a matter of labeling? 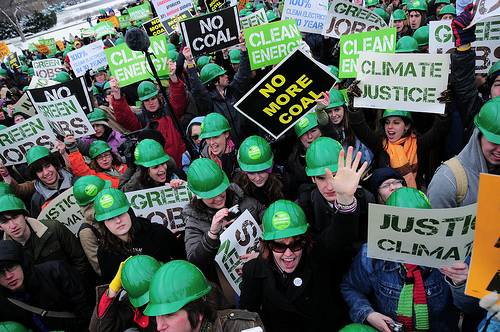 Historically, environmentalism has defined itself as preserving wilderness from human interference. John Muir and others like him built a movement around saving beautiful natural spaces such as Yosemite Valley and Sequoia National park. Rachel Carson’s Silent Spring in the 1960’s brought further attention to the way that humans were harming the environment through pesticide use. This environmental awakening culminated in 1970 with the first Earth Day in which one out of every 10 Americans participated.

At some point in the 21st century we became tired with the idea that planet had to come before people. With close to 7 billion of us in this world, we can’t separate ourselves from our environment and we need a way to clothe, feed and shelter all of us. We’re changing our natural environment and we will continue to do so. The issue at hand is simply how we go about it.

In 2007, civil rights advocate Van Jones sparked a new movement around the idea of “building an inclusive green economy strong enough to lift people out of poverty.” Though right-wing conservatives managed to kick Jones out of his role as President Obama’s Green Jobs Czar, the movement for green jobs continued to grow. In 2009, over 12,000 young people gathered in Washington D.C. and stormed Congress demanding green jobs and clean energy as a part of Powershift, a conference organized by Billy Parish and the Energy Action Coalition.

I was at that conference. I distinctly remember looking around and realizing that we weren’t there to protect the wilderness. We were there to build a more sustainable and equitable world. And we’re not alone.